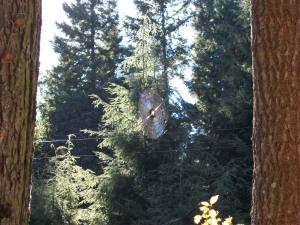 How do spiders do that? Those two trees are at least ten feet apart.

Recently I woke up with all the tell tale signs of an emerging cold, you know, the scratchy throat, the slightly more then usual MS weakness and tightness in my muscles a little sniff here a little sniff their with a sneeze or two thrown in for good measure. And it’s in these very early moments of an oncoming cold virus where I have to make a very difficult health choice. If I hit a cold hard as soon as I notice it coming on with mega doses of zinc I can almost always knock down both the severity of the cold as well as the duration of having to put up with this pesky little health annoyance by about half as much. And it would seem that the answer would be simple enough to deduce, but it’s not.

For all of the benefits that I get from using zinc to combat a cold I also have to accept a sudden flair in all of my MS symptoms after about the third day of using the zinc. And if I don’t stop completely after the fourth day I risk having a full blown MS attack that could last for days or even weeks. And this is knowledge that I have acquired over almost sixteen years of having both colds and Multiple Sclerosis so I know for a fact that this is how my body reacts to zinc.

And in fact, while were on the subject, this is pretty much the same choice I have to make when deciding whether or not to get a flu shot or not each year. I really don’t know what they put in the flu vaccine, though I’ve heard they use mercury as a preservative, but whatever is in it I seem to always have a reaction that in many cases is even worse then having the flu itself.

And when you consider that recent studies have shown high levels of iron deposits in MS patient’s brain lesions after they have passed away I just have to wonder if heavy metals are something that people who suffer from MS, or perhaps any autoimmune disorder, just can’t tolerate to much of in their systems.

However, these are not the only triggers when it comes to me personally and many of these other vitamins have nothing to do with metal in any way, or at least as far as I know. I cannot tolerate vitamin B12, same thing as above my symptoms go nuts after just a few days of trying to take it, however what’s strange is that, no other B vitamin seems to affect me like this. Vitamin E also seems to adversely affect my MS along with Cod Liver Oil, though Omega 3 fish oils don’t bother me at all.

And one final note here about iodine, I recently read that salt, or sodium, may play a part in triggering Multiple Sclerosis. And I can truly believe this as well, if the salt has iodine added to it which most of the time it does, as at some point years ago I tried taking iodine supplements, for some reason that I can’t remember anymore, and with in two days I stopped as my MS began to rebel violently to the addition of this nutrient in its more concentrated form.

Well that’s some of the things that affect me. I would be very interested in knowing what triggers other people with MS, or any autoimmune disease, have noticed in their lives? Who knows, maybe we can figure this thing out on our own!