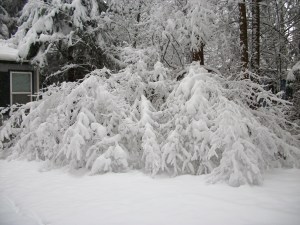 Yes! It really does snow in Western Washington.

It’s been quite a few years since I was diagnosed with Multiple Sclerosis and over that period of time I cannot  even speculate how many times I have read that exposer to higher temperatures is linked to a worsening of MS symptoms. And of course I don’t really doubt this, everyone’s experiences are different, but I most be the oddball out because it does not seem to be the temperature that  bothers me but rather, the temperature combined with the humidity that does me in.

I can go out on any hot day where the humidity is low and not seem bothered at all by the actual temperature. And what is even stranger is that I can take a hot shower, where it is humid, and not feel any worse when I’m finished though to be honest, I don’t take long showers, so that might be the difference here?

Does anyone else see a difference in their MS symptoms during different weather patterns? I’m really curious!

14 thoughts on “MS Changes in Weather and Heat Exposer”