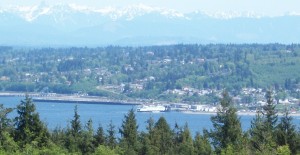 A docked ferry in Washington State

Over the holidays I noticed, even watched a few, a number of programs that discussed miracle cures and what were claimed to be Angelic interventions.  My interest for this blog centers on those cases where the medical field states freely that either a cure or a spontaneous remission should not have been possible by any means known to man.

This obviously leads one to believe that only an intervention from God could have been the reason for an otherwise impossible cure.

And that got me to wondering that if God did step in and cure what couldn’t be cured, and that would include multiple sclerosis, could he have also left that cure to be discovered with in the DNA of that particular patient. I just can’t help but to believe that if we took the blood sample of someone before this miraculous event and studied it along side a blood sample after the cure that we might be able to determine a difference between the two samples and perhaps be able to cure others with the same disease.

I mean it almost makes sense that if God was going to step in and save one person, who otherwise would not have survived, he would also leave behind at least a hint as to how to save everyone else with that affliction, doesn’t it?

I just have to think that its worth our time to take a closer look at what messages may have been left in the DNA of these individuals.  Do you think it’s possible? Obviously, I do!