I’m not a big fan of edible marijuana only because you’re never quite sure how much you have consumed until it takes affect. Where as when you smoke it the effects are quick and very apparent almost immediately. I will admit that in either instance it does a great job in reducing my spasticity and pain in my legs and body. With that in mind here is a picture blog of the many edible forms of THC that are available, legally, in Washington State.

These prices vary from store to store and week to week. This industry is so new that changes in product and prices are always changing. Inhalers are also available. The vapor cartridge costs $50.00. The vapor pen and cartridge cost $65.00. When I checked last the price of the cheapest gram of pot you can smoke was a very reasonable $10.00 or $35.00 for an eighth of a gram. However that is not one of the more potent brands.

I am ecstatic that I live in one of the two states, Washington and Colorado, where voters were progressive enough to take on the responsibility of legalizing marijuana. It was a long time in coming and the right thing to do in my opinion. It is truly ridicules to flood our jails because of smoking a weed when alcohol kills thousands of people every year through traffic accidents while heightening the incidence of domestic violence nationwide, and remains legal in every state.

And unlike alcohol, marijuana can boast a number of positive outcomes that go

well beyond just getting high. Lately many people have been watching with great interest at a number of new studies using THC and other compounds in marijuana in the treatments of a number of different diseases. It’s been long understood that marijuana has a positive effect for cancer patients who are being treated with Chemotherapy drugs and its ability to help them both eat and ultimately digest food that is otherwise difficult for these individuals during periods of treatment. And lately other studies have shown marijuana’s ability to slow and even stop some cancers ability to replicate and grow after being treated with many of the compounds found in pot. And these studies need to be continued without the fear of government intervention as has always been the case in the past when researchers wanted to do more complex research on how cannabis affects certain disorders like Parkinson’s and epileptic seizures, which, by the way, is showing extremely positive results in both of these disorders in newly released research studies. 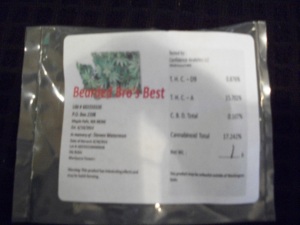 In fact, I can personally think of two studies that I would like to see done with regards to Multiple Sclerosis if they aren’t being done already? My experience with marijuana and MS is that cannabis has a very positive effect on all forms of pain reduction with regards to MS and also greatly reduces the amount of daily nerve spasticity that is so commonly experienced by MS patients. And though I personally don’t relish the high that marijuana provides I also must admit that it does at least offer a couple hours of relief from a disease that otherwise is a constant annoyance every second of every minute of every hour of every day three hundred and sixty five days of the year.

I have been asked on a few occasions why I never got a marijuana medical green card to purchase the drug as a medication for my own disease and the answer was always because I felt three or four hundred dollars was an absurd price to pay for something that I only used on a rare occasion. And now with pot being legal in the state of Washington I no longer have to worry about this additional cost to my wellbeing.

So once again, thank you Washington State and Colorado State for being the forward thinking people that you are. And I certainly hope that this experiment in legalization both works and is replicated nationwide as time goes on. It is time for a gentler drug policy in the United States because the war that has been waged on drugs up to this point is just not working and new ideas are needed now so we can continue to move forward!