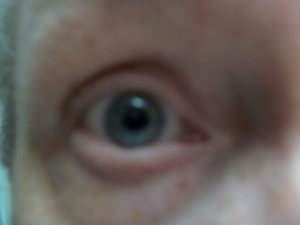 Eye of the Shadow Snake!

One morning about three weeks ago I wasn’t terribly surprised when I woke up to the flashing strobe light sensation that often accompanies one of my MS attacks when I first got out of bed. I had known for a couple of months that I was experiencing my somewhat annual flare up so it didn’t strike me as being any big deal as that is normal for me. The only thing that was different on this occasion was that the flashing seemed confined to just my right eye when usually it’s in both eyes. However, I have become used to the fact that my attacks are never exactly the same from year to year so I paid very little attention to that fact.

It wasn’t until the next night when I was driving to a local baseball game that the real strangeness taking place in my right eye was to get my total undivided attention. As I was driving the flashing started to give way to this grid of dark spots that covered part of my vision which was bizarre, in that, I have never had that as one my symptoms during an MS episode before. I felt like if I had a pencil I could have easily played that kids game of connect the dots and that’s exactly what this grid looked like as I gazed threw it and onto the rest of the world which is also a bit distracting when your watching cars coming at you at fifty to sixty miles an hour. But the strangest and literally the scariest symptom was, as yet, to come.

Upon reaching the game what I can only describe as a snake or worm like dark shadow began making figure eights throughout my line of vision, but again, just in my right eye, which at the time, I was thankful for because one of my biggest fears about MS is eventually going blind. The thought of losing my eyesight, to say the least, terrifies me when ever I have MS related eye problems. The worm continued its seemingly prearranged journey through most of the rest of the baseball game until about the eighth inning when it began to fade into the twilight of the oncoming darkness beyond the lights of the stadium. And thankfully it was completely gone by the time I started the long drive back home, but most certainly, not forgotten.

It just so happened that I had a doctors appointment with my regular family doctor the next day and after describing my previous day’s experience my doctor scheduled an emergency appointment with my Optometrist the very next day after that. When I woke up that next morning, and as I prepared to leave for my appointment, I was greeted by what seemed like a hundred floaters moving around my field of vision in my right eye, which was kind of like watching a meteor shower in my head.

Fortunately, it did not take long for my Optometrist to figure out what was happening, and what was happening had absolutely nothing to do with Multiple Sclerosis at all. He explained that as we get older there are tiny fibers in our eyes that attach the gel like substance inside of the eye to the Retina and sometimes these fibers break causing all of the symptoms that I had previously described. He referred to it as a Vitreous Detachment which I quite honestly had never heard of before. He went on to explain that this can only happen one time in each eye and that people who had this happen in one eye were far more susceptible to having this happen again in the other eye at some later date.

As my fear of losing my sight began to abate he told me that it would probably be about thirty days for the floaters to finally disappear altogether, which seems to be just about right as it’s been about that long, and I’m not noticing to many of these any more. And let me add this, this was not a great experience to have, and I’m certainly not looking forward to going through this again if it does happen, but at least I’ll now what’s happening the next time, the terrifying shadow snake comes to call!